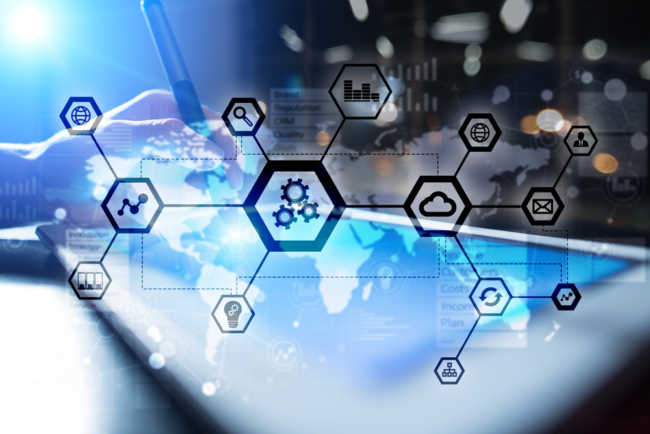 Gartner Research defined network virtualization as the process of combining hardware and software network resources and functionality into a single virtual network. This offers access to routing features and data streams that can provide newer, service-aware, resilient solutions and also, many challenges; newer security services that are native within network elements; support for subscriber-aware policy control for peer-to peer traffic management; and application-aware, real-time session control for converged voice and video applications with guaranteed bandwidth on-demand.

For the most part, when we speak of virtualization, we speak of hardware virtualization. That means that we create, on a host machine, a virtual machine that looks like another computer with an operating system and software. The software on the virtual machine is separate from the host machine’s resources, and as far as it is concerned, it is running on its own computer (that we call the guest). Both in information technology (IT) and in operational technology (OT) environments the benefits of network virtualization have led to its rapid adoption.

While there are great benefits, there can also be serious challenges of network virtualization. One of the challenges is that the IT staff, OT staff, or sysadmins must truly know their servers and network. Especially in a virtualization overlay on an existing physical network, the administrator must know exactly what their system is doing, what they want it to do and how it will be laid out for future expansion.

You can’t just throw another managed switch on a line and call it good. You need to make sure that the data center you are virtualizing has adequate and appropriate electric power and backup generation in case of power outages. You need to make sure that the building you’re in has adequate heating and cooling resources, and that it is secure from physical penetration.

From your design, you need to make sure that the virtualized system has enough availability to operate better than the old system did.

This means that system administrators need to borrow from OT systems the concept of front end engineering design (FEED). The virtualized network must be specified at least as well as you would specify a physical set of hardware and software. A FEED must be clear and complete, and supported by all the stakeholders in the system.

“The nice thing about standards is that there are so many of them,” said legendary computer scientist Andrew S. Tanenbaum. Tanenbaum may be cynical, but he is not wrong. One of the things that can bite a virtual system and be considered a big challenge in the virtualization fo the network is a change in a standard that makes the way the system is virtualized not work, or not work well.

The system administrator needs to stay abreast of standards better than if they were just running a standard hardware/ firmware system.

One of the issues virtual systems must deal with is the hardware. Often, the idea that the system is virtual is taken to mean that you can run the system on significantly less costly servers and other hardware. This is far from true. In fact, the hardware and firmware you use in a virtual system needs to be much more robust than a conventional system.

Changing the Architecture of the Network

From the very beginning you should implement a network information management tool, such as Statseeker. In any virtual environment, it is even more critical than in a standard networking situation, to be able to see down into the system – to be able to see all the devices and nodes, virtual or not, that are on your network. Statseeker gives you the ability to scale (read: contained CAPEX/OPEX cost) from a small system to a huge system of various interfaces. Otherwise, you’ll drive yourself crazy trying to troubleshoot the virtual system.

You will also need to avoid VM sprawl, and storage will need to be centralized and not located at each computer. And in doing that, you need to make sure that security is not dropped off. In a virtual network, combining Statseeker with a good vulnerability scanner is critical to proper security implementation.

New Skills and Organization for IT and Admin Staff

You and your staff need to have training and experience in handling all the challenges of virtualization and virtual networks. The system is not the same as a standard system, it’s just virtual. It needs to be operated, designed, and maintained differently, and those skill sets must be available to you before you start virtualizing your systems.

The IoT, the Cloud and Virtualization

Virtualization is ubiquitous, and the sensor-centric networks that make up the IoT are becoming ubiquitous as well. Most data goes to the cloud, where virtual servers and hosted desktops permit DaaS (Data as a Service) applications to be ubiquitous as well. Virtualization technology is implemented in thousands of devices and systems already, and the idea is that IoT and Cloud computing will make our lives better.

Virtualization and Its Impact on Network Monitoring

Network monitoring in a standard hardware/firmware system has often been considered a “nice to have” rather than a “critical need.” As we move to virtual systems, the ability to see all the way down through the network, in real-time becomes a critical need.

Since you are operating a virtual network, you can’t just walk out there and lay hands on the server, or the network appliance, that is giving trouble. You must have some way to get performance data and diagnostic data from the virtual system, just as you would from a standard, physical hardware and firmware system. Statseeker provides the tool you need to do that. It is simple to implement, simple to operate, requires only a single server, and provides the deep granularity you need to make your virtual network behave.

Frank Williams is the CEO of  Statseeker, a global provider of innovative network monitoring solutions for the IT enterprise and OT industrial market space. Frank holds a BSEE, augmented by many post graduate courses in management, leadership and technology.