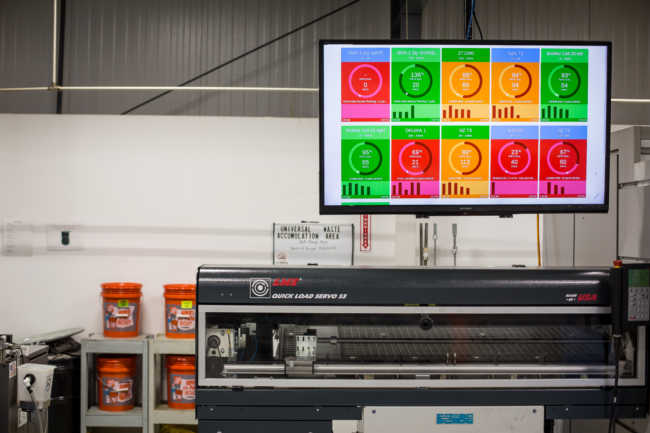 MachineMetrics, which equips factories with the digital tools needed to increase productivity and win more business, announced this week it has raised $11.3 million in Series A financing.

MachineMetrics is a pioneer in Industrial IoT (Internet of Things) technology. Its system is designed so that customers can install it themselves without the need for expensive and time-consuming customization.

Once installed, manufacturers can collect, visualize and analyze data from any industrial machine. It automatically senses when there is a problem, even predicting some problems hours or minutes before they occur, and recommends solutions that reduce costly unplanned outages.

In addition, MachineMetrics benchmarks a company’s machine performance against those of their peers to help guide future investments.

“Now is the internet moment for manufacturing,” said William Bither, CEO and co-founder of MachineMetrics. “Because we’re pulling data from thousands of machines, we’re able to gain a unique understanding of their problems. These insights are delivered back to our customers so they can take action to gain a competitive edge.”

“With MachineMetrics, we boosted production by more than 100 hours each month in the first three months alone,” said Tim Borkowski, vice president of manufacturing at Fastenal, a global maker of industrial equipment. “There’s no more educated guessing or finger-pointing; there’s a solid reason behind everything and every decision we make. I can’t imagine what life would be like if you took it away. It’s that ingrained in our day-to-day operations.”

The company’s latest solution allows factory workers to share MachineMetrics’ data with their remote maintenance teams and makers of their equipment, and vice versa. This enables service teams to identify problems through remote diagnosis, reduce onsite service visits by 10 to 20 percent, and receive predictive maintenance alerts, which could lead to new business.

According to Mike Mugno, vice president of Rem Sales/Tsugami, “MachineMetrics Service is a game-changer. We can now provide faster, better service because we’re collecting data that really didn’t exist before.”

Manufacturing accounts for 16.6 percent of global GDP and is on the brink of a new digital age, often called the Fourth Industrial Revolution. That revolution combines two advancements — predictive analytics and artificial intelligence — and applies them to physical objects (ie, your Nest thermostat), creating the Internet of Things. Only with this ability to send and receive data can humans, and one day the objects themselves, figure out how to slash waste and increase output.

“Manufacturers have to digitize if they want to remain globally competitive,” said Aaron Fleishman, Principal at Tola Capital. “Real-time shop floor visibility is the first step toward digital transformation. MachineMetrics’ platform provides this and goes a step further by providing AI-driven predictive analytics for manufacturers to make more informed real-time decisions. It’s no longer a question of if but when manufacturers will adopt this transformative technology.”