Smart Cities are Made Smart by Planning and Strategy 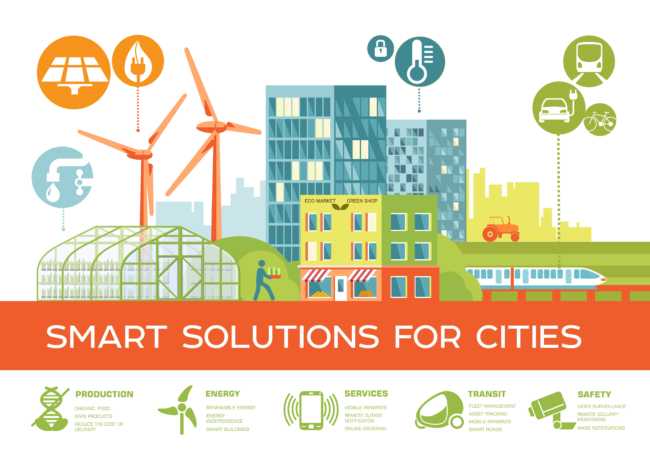 Smart Cities are Made Smart by Planning and Strategy

Cities around the world are making huge investments in technology that will help them provide better services, reduce greenhouse gas emissions and operate in a way that leverages the power of IoT, artificial intelligence and 5G technologies. Put together, these investments are part of the story in delivering on the vision of “Smart Cities” – places that serve the needs of both their citizens and the planet.

Framingham, Massachusetts-based market research firm International Data Corporation (IDC) predicted last year that Smart City initiatives would attract technology investments of more than $81 billion globally in 2018 – and that it expected spending to grow to a staggering $158 billion in 2022.

It should thus come as no surprise that the potential of Smart Cities has attracted global technology companies such as Zurich-based ABB to develop solutions to help realize the Smart City vision. According to Markus John, LBU Manager Energy Industries at ABB AG, the key to a successful Smart Cities strategy lies in realizing just how broad and impactful it can be.

From public transportation to power consumption, he says that cities need to think holistically about what they want to achieve. This means that, for example, a city cannot model its power planning for the future on the centralized power generation infrastructure of the past.

“(We no longer) produce energy from the top down from a power plant, and then distribute the energy to the households,” Markus John explained. “It’s handled vice versa very often. People have solar panels on their roof, so they are consumers, but also producers. There are now a mix of producers and consumers in cities – and you have to manage them in a smart way.”

Sleman Saliba, Global Product Manager at ABB, agrees and suggests that the evolution of power generation – and the reconfiguration of power distribution, metering and billing – is an important part of the Smart Cities evolution.

He also says, however, that people shouldn’t think about Smart Cities being driven by a single technology – or set of technologies. Saliba instead observes that a Smart City is really one that leverages the connection and communication between all of these exciting new technologies to build something fundamentally new, different and transformative.

“It’s really about information technologies being part of every single day of our lives and every single part of our equipment,” he says. “So it’s not about automation – that’s the important thing – it’s really about connecting, combining equipment, services and IIoT (Industrial Internet of Things) – , and combining them together and using them for benchmarking, for data analytics and really leveraging the information that we get by having every piece connected.

Sleman Saliba underscored that the real “smart” piece of smart cities comes from the data and insights that come from making those connections. “The important stuff is not only on one premise but really interconnections between companies, between cities, between buildings, and leveraging this information that you get by using technologies across companies and factors,” he adds.

Markus John provided a great real-world example of where this approach is making a difference, citing the work of city officials in Mannheim, Germany to take 180 hectares of prime land in the city (made available by the 2013 departure of the US Army) and use it as a boost to accelerating its development as a Smart City.

He said that communities making this kind of a change have a unique opportunity, both in the center of the city, and – in particular – its suburbs. “Communities are thinking about how can we manage it smartly – in a modern way?,” he said. “It’s not just about delivering power from outside, but about how to make this suburb intelligent, in the way of buffering energy with batteries, maybe solar panels on the roof, optimizing energy consumption in the suburbs. Perhaps providing e-mobility by car sharing activities.”

ABB has done a great deal of work in communities around the world, helping them make this kind of change. For example, in Västerås, Sweden’s fifth largest urban area, ABB was awarded a contract in 2018 to develop digital solutions that will minimize environmental impact and create high-value digital services for customers. A key objective of this digital investment is to integrate the control rooms of the many automation systems that manage these expansive operations to create one unified operating environment.

Building for the Future

The final piece of advice on IoT Smart Cities comes from Sleman Saliba, who offers this advice on getting started. “If you think about adopting new smart building technologies, then the first thing I would recommend, it is to take a step back, talk to us, talk to a city developer and get first a picture of what you have in your city and where are the areas where you need an improvement most,” he said.

And that sounds like smart advice for a smart city.

Disclosure: We collaborate with ABB Industrial Automation Energy Industries Division (US branch), running an awareness campaign and preparing a lead generation one in the upcoming months. This article is part of the awareness campaign and represents our selection, based on two interviews with Sleman Saliba and Markus John. This article was written by Geof Wheelwright, one of IIoT-World’s contributors.