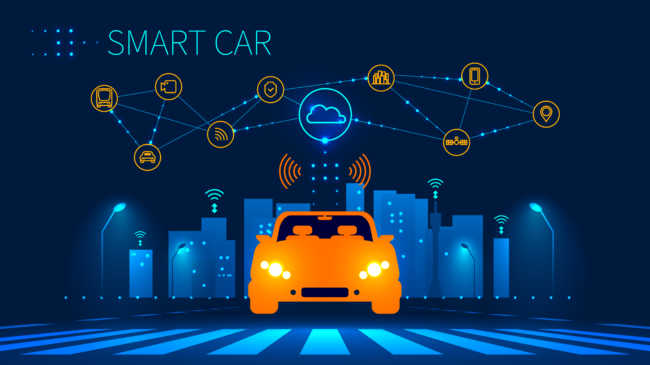 You would have been forgiven for thinking that this year’s Consumer Electronics Show (CES 2018) was actually an auto show. There were electric cars, semi-autonomous cars, cars with built-in Amazon Alexa, full-blown autonomous cars, cars with massive LCD panels, AR displays and 5G mobile communication speeds – and a lot of them were being shown off by companies that you don’t traditionally associate with the automotive industry.

So the real lesson here is that the road to the future of transportation will be paved with technology partnerships between players across a vast AR transportation innovation landscape that includes the mobile communications, processor manufacturing, IoT device, augmented reality and traditional automotive sectors.

One of the most impressive range of business-to-business partnerships on show at CES 2018 was provided by graphics processing unit (GPU) pioneer NVIDIA. The company revealed that it has more than 320 partners for its NVIDIA Drive technology – and held a press conference on the first press preview day of CES to provide details on its work with Uber and Volkswagen. 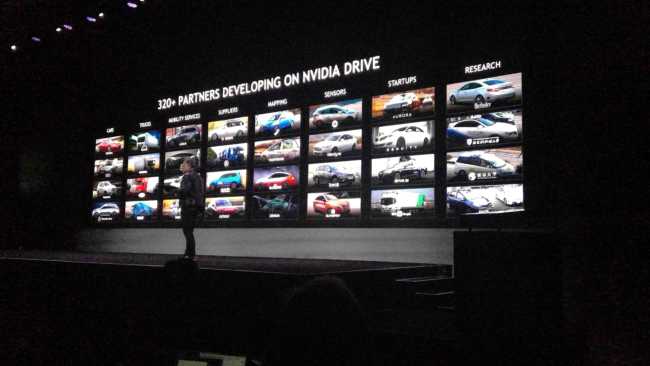 Volkswagen CEO Dr. Herbert Diess joined Jensen Huang, founder and chief executive officer of NVIDIA, on the stage at CES to talk about the deal – which will see Volkswagen’s new I.D. Buzz use NVIDIA technology. Volkswagen calls the I.D. Buzz a “rebirth of the iconic VW MicroBus, reimagined in electric car form and infused with AI technology for the cockpit and self-driving”. 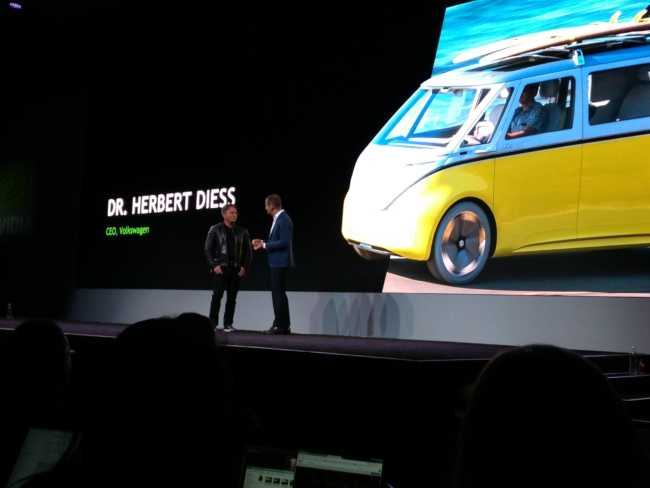 “In just a few years, every new vehicle will be expected to have AI assistants for voice, gesture and facial recognition as well as augmented reality,” Huang in announcing the deal. “Volkswagen’s work with NVIDIA DRIVE IX technology will make that a reality. Together, we are building a new generation of cars that are safer, more enjoyable to ride in than anything that has come before, and accessible to everyone.”

Meanwhile, consumer electronics giant Sony Corporation wasn’t about to be left out of the automotive announcements at CES. At the company’s signature CES launch event, Sony President and CEO Kaz Hirai a “Safety Cocoon” concept for cars. 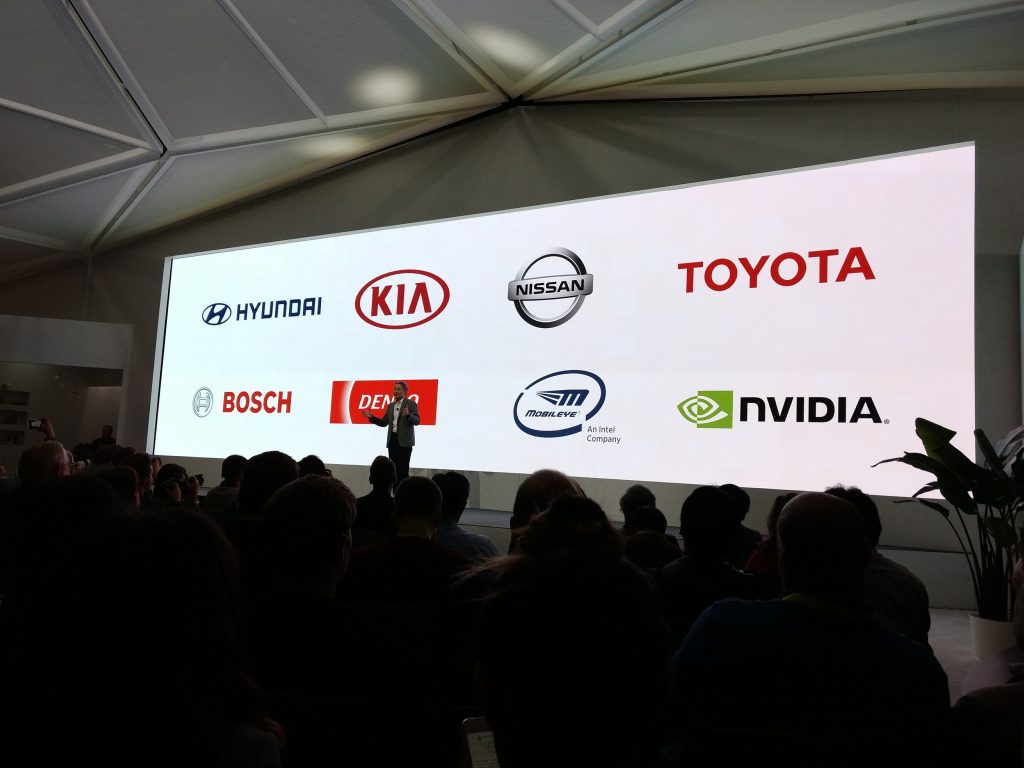 The company says its latest images sensors will create “an area of enhanced safety around a vehicle where it can monitor and detect the 360-degree surroundings and prepare for danger avoidance from an early stage in a variety of driving situations”.

Sony demonstrated how its sensors detect “their 360-degree surroundings, even under backlit or unlit conditions, and help vehicles quickly evade danger”.  Sony also took the opportunity to highlights its own range of automotive partnerships – including work with Hyundai, Kia, Nissan and Toyota.

Qualcomm Gets Together with Honda, Ford, Jaguar/Land Rover and China’s BYD 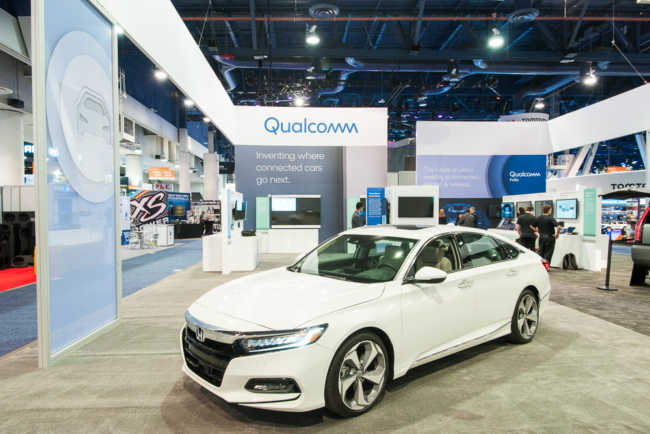 The one that’s most likely to fall into the category of “something you could afford to buy” is Qualcomm’s work with Honda on the navigation and infotainment system in the 2018 Honda Accord.

According to Qualcomm, the 2018 Honda Accord features a “highly advanced Snapdragon Automotive Platform to power cutting-edge applications for its in-vehicle infotainment and navigation system. Snapdragon automotive solutions are designed to support automotive manufactures’ efforts to provide rich, intuitive experiences to consumers”. The company says that the 2018 Honda Accord also features a Qualcomm® 4G LTE modem which is designed to support the Hondalink™ vehicle connectivity system.

One of the other important trends at CES was the way in which the communications infrastructure being added to towns and cities around the world is impacting the overall transportation ecosystem by allowing smart cares to talk to smart cities.

Longtime automotive industry supplier Bosch, for example, showed off a “connected parking” system that will allow smart cars to cut down time (and energy) wasted in finding and using parking spots.

At CES 2018, the company said that U.S. drivers now spend more than 40 hours a year stuck in congestion, wasting some $160 billion in the process.

“Of this time, roughly one-third is wasted on the search for parking alone. This is where Bosch can help: with its community-based parking, it can simplify the search for a suitable space,” said Bosch in its CES announcement. “As they drive by, cars automatically recognize and measure the size of the gaps between parked cars, transmitting the data in real time to a digital map. In this way, drivers can have themselves guided directly to free parking spaces. Bosch is already testing this service in German cities, including Stuttgart. This year, as many as 20 U.S. cities will follow, including Los Angeles, Miami, and Boston.”

AR Makes its Way into The Car

One other noteworthy automotive technology trend on show at CES was the extent to which many car makers are exploring the use of augmented reality (AR) technology in cars. 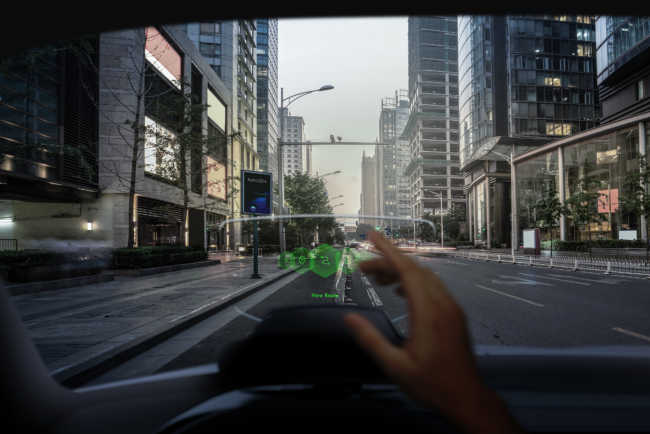 Swiss company WayRay, for example, showed off its new Navion in-car AR display – which it describes as a “holographic AR navigator” that projects in front of the driver. “The compact device fits discreetly onto a dashboard and displays information in AR: driving directions, trip details and real-time indicators for things like pedestrians, POIs (points of interest) or alerts,” the company explained in its announcement. “All content is displayed exactly where the driver needs it to be — on the road ahead. No headgear or eyewear is required.”

The automotive AR announcements at CES build on a broader theme of recent AR development in the automotive industry, such as Porsche Cars North America’s news late last year that it was introducing “Tech Live Look,” an Augmented Reality (AR) technology designed to improve technical services at Porsche dealerships in the United States.

For more on AR in the automotive industry, download our eBook on the subject.

This article was written by Geof Wheelwright, a technology journalist for more than 25 years (including work for The Times of London, the Financial Times, Newsweek, Time Magazine, The Guardian and trade publications such as Computerworld and Geekwire) and is now the Director of Marketing Communications for Mountain View, California-based Atheer, Inc.

The use of augmented reality (AR) in industrial applications is growing by leaps and bounds and has become tantamount in Industry 4.0 concepts. In fact, 28 percent of those surveyed in a recent PwC study reported that they have implemented, 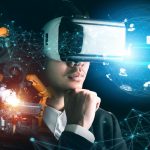 Augmented Reality for the energy assessment of production systems

Industry 4.0 has always been synonymous with recovery and efficiency, which is also declined in terms of energy efficiency: Augmented Reality provides tools that enable the energy assessment of production systems and plants. The current industrial situation sees companies in a 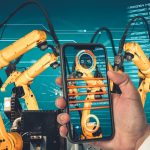