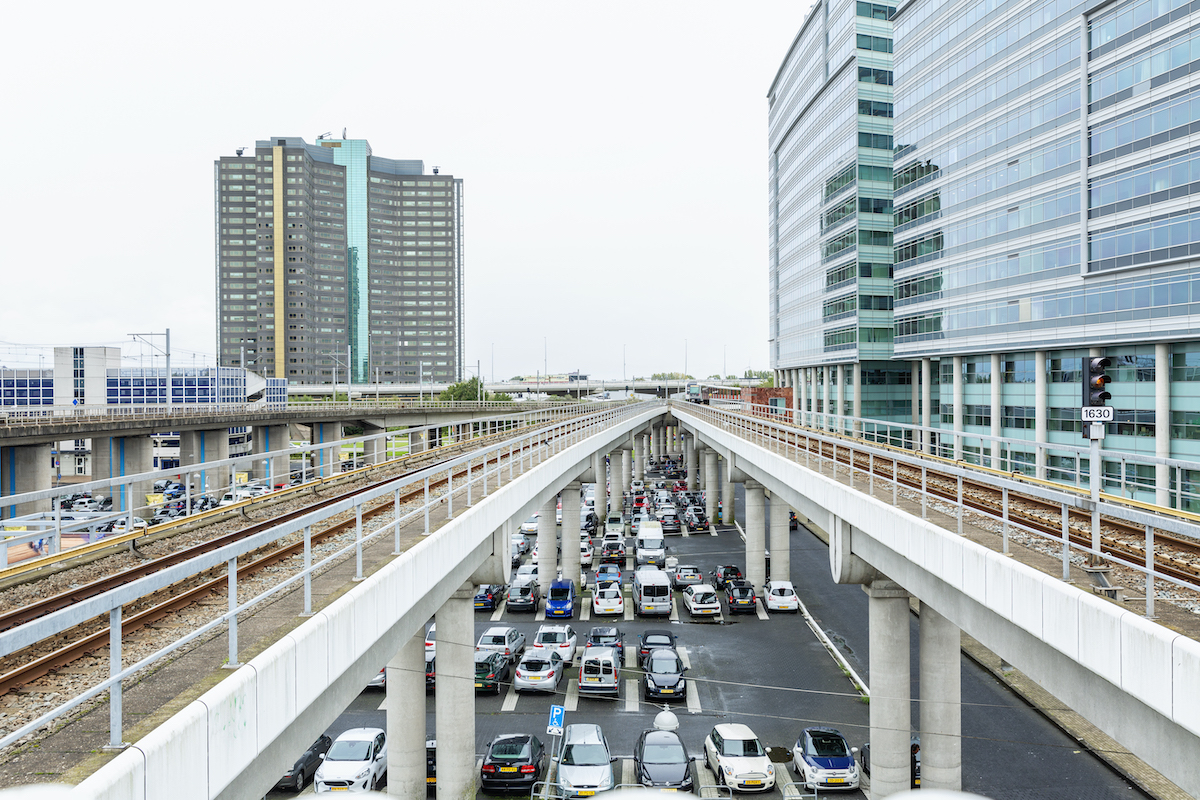 Amsterdam is the largest city in the Netherlands, with a population of 2.4 million. The city is also one of Europe’s leading tourist destinations, attracting around 6 million people a year. Amsterdam’s oldest quarter, the medieval centre, is very small and has an incredibly complex infrastructure, with roads, tunnels, trams, metro, canals and thousands of bicycles.

This creates one of the world’s most challenging traffic management environments, which the office for Traffic and Public Space (Verkeer en Openbare Ruimte) meets through vision, action and modern technology. This is typified by the new intelligent data communications network being installed to support the city’s traffic control system, for which they have selected advanced Ethernet switching and routing technology from Westermo.

In 2015, the municipality of Amsterdam created its own team that was responsible for the development and operation of the data communication network that supports the Intelligent Traffic Systems (ITS) in the city. Previously, this was managed by an external partner, but due to rising costs, and increasing performance and cybersecurity requirements, it was decided the best way forward was to take back full responsibility for the network.

Eric Bish, Senior Systems and Management Engineer and Project Manager and Albert Scholten, System and Management Engineer, were two key members of this team responsible for the Information and Communications Technology (ICT) systems for traffic control in Amsterdam. “The existing communications network supporting the traffic control system had served us well for many years, but it had become outdated and the daily costs to maintain the leased line copper network was very high. With the challenges the city faced going forward, we needed to modernise our systems,” said Scholten.

“The old network was mostly based on analogue modems, multi-drop-modems, xDSL extenders and 3G routers from Westermo,” explained Bish. “These devices have proved to be very reliable, so when we started to look at the requirements for the new system, Westermo technology was given serious consideration.

“We worked closely with Axians, our supplier of network services, and Modelec Data Industrie, the distributor of Westermo products in the Netherlands. The collaboration between the three parties was essential to the success of the project. Modelec Data Industrie are very knowledgeable about industrial data communications and during constructive discussions regarding the system requirements they suggested that Westermo technologies would be a good choice for building a robust and reliable network for the future.

“From our meetings a roadmap was established. Our long-term plan is largely based on having a fibre optic infrastructure managed by Westermo Lynx and RedFox Ethernet switches. However, installing new cables is a costly and time-consuming process, so where existing fibre optic cabling is not already available, we have found the Westermo Wolverine Ethernet Extender to be extremely useful. This device allows us to create reliable, high speed, fully managed network solutions using the existing copper cables linking the traffic light systems. For remote connections, between the edge networks and the control centre, we have used Westermo MRD 4G cellular routers, which offer a redundant SIM option and simplifies the process of setting up IPSEC VPN’s.

Before a large-scale implementation of the new system could begin, the Lynx switches and Wolverine Ethernet Extenders were tested at some of the less critical road junctions. To assess the Westermo MRD 4G cellular routers, a mobile test system was constructed and taken to popular parts of Amsterdam during King’s day, the annual Dutch national holiday and busiest day of the year. Despite the huge crowds swamping the mobile masts, the routers delivered excellent performance.

Having met our required standards during testing, the Westermo devices were deployed extensively throughout the city and are now providing the data communications for several major traffic control systems. Over 1300 pieces of equipment are currently connected via the new network and with the traffic control systems being constantly upgraded this figure continues to grow.

“We have found the technology to be robust and reliable. The devices consume very low power, which means they generate little heat. This is important, as the switches are often installed in cramped, unventilated cabinets with other electronics that can be damaged if they get too hot.”

“The Westermo Lynx switch is very versatile, offering an array of smart features and network connections. For example, the SFP option gave us the ability to easily switch between copper and fiber wiring, while the serial port enabled connection to legacy traffic light systems.

The option to perform text-based configuration from a console port has supported our need for fine granular control and rapid mass deployment of devices. Every device received a consistent configuration, but we had the flexibility to adjust the configuration of specific devices, where required. This functionality has enabled us to install all the devices in a little over 12 months. This helped us to make significant savings because the costly leased lines to the datacenter could be terminated sooner.”

“While we were installing the new network, we needed to retain the old system and move the functionality across gradually. However, with the cost of maintaining the old leased line copper network was so high, we wanted the new network to be very simple and fast to implement. We started with a classic layer-2 approach, consisting of an MRD router and up to six Lynx switches or Line Extenders connected to it. Every Traffic Light Controller was then connected to a Line Extender or switch, depending on the existing cabling in place.

However, because it is difficult, time consuming and costly to install and maintain a data network of this size within a city such as Amsterdam, we knew the new network would eventually have to be able to support more than just the traffic light systems. In fact, it must support camera surveillance, traffic information systems, automatic number plate recognition camera and even public lighting systems. Critically, these other applications must be isolated from each other for security purposes, while changes or additions to the network must also be simple to achieve.”

“Efficient use of the cable infrastructure is therefore critical, which is why we selected switches with layer 3 functionality at the start of the project. This enabled us to create a layer-3 network design. A clever combination of OSPF routing, local firewalling and layer-2 and layer-3 features has yielded a very flexible, secure and redundant gateway network design. The network is now sufficiently resilient to withstand common issues, such as cable damage and power outages.”

“Using the Westermo Redfox switches, we will soon couple our updated network to the fiber optic rings used to control the city’s metro lines. This will provide fully redundant gigabit connections to our datacenter for many of our surveillance cameras and traffic systems.”

“Using Westermo technology we have built a robust and reliable networking solution that will last for a long time. The technology offers the functionality we need to modernise the network and enable us to make quick system upgrades over the lifecycle of the system,” Bish added. “As far as we are aware, this is the most advanced network infrastructure in place in The Netherlands and to date the solution has performed flawlessly. We expect that within five years the industrial network will cover the whole of Amsterdam and its surrounding areas and this will almost completely rely on gigabit fiber links, with only a handful 4G connections still required.”

There are several hundred traffic light systems throughout Amsterdam. These work autonomously, but can also be controlled centrally, which is one of the most critical tasks for the city’s department for traffic and public space. In the event of traffic congestion, traffic control centre operators can manage the flow of traffic and if necessary, reroute traffic to less crowded roads.

The traffic light control systems interconnect several traffic lights. The infrastructure connecting the traffic lights is a mix of existing copper cables and new fibre cables. However, in order to connect a string of traffic lights back to the control room, the city has been relying on leased lines. This solution is not only expensive, costing around EUR 2 million per year, but also does not provide the reliability required for a system of this magnitude. The savings made as a result of replacing the leased lines with the Westermo cellular routers is estimated to cover the cost of the network upgrade project within just three years.

An environmental zone has been established in the central part of Amsterdam with the aim of decreasing pollution from motor vehicles. Vehicles that are not environmentally friendly are prohibited to enter the `green zone’ and automatic number plate recognition cameras have been installed to ensure that the restriction is followed by motorists. Approximately 80 control points have been established at the entrances to the city to monitor about three million cars every day. Between one and five ANPR cameras automatically read the vehicle registration numbers as they pass the control points. The photos are processed inside the camera, converted into simple text information and sent to the control centre through a secure encrypted IPSec VPN tunnel using the MRD 4G cellular router.

The City of Amsterdam plan to participate in the European C-ITS smart traffic project, which will allow real-time traffic optimisation. This will mean that there will be a requirement for more bandwidth and lower latency so in time, the mobile connections will be replaced with a fibre optic network, using for example the Lynx and RedFox switches.

The Amsterdam traffic is continuously monitored from the control centre to help operators maintain the flow of traffic, reduce congestion and minimise the risk of accidents. Operators make decisions based on the information provided by hundreds of cameras installed across the city. Many of the regular surveillance cameras are connected to the network via Westermo switches.

The real-time video feed from the ANPR cameras can also be viewed for traffic controlling purposes. These are connected to the control room using Westermo MRD 4G cellular routers, which provide secure IPSec encrypted VPN tunnels. When traffic congestion occurs, the traffic control managers are permitted to disable the environmental monitoring system and activate predefined scenarios that reroutes the traffic to dissolve the congestion. 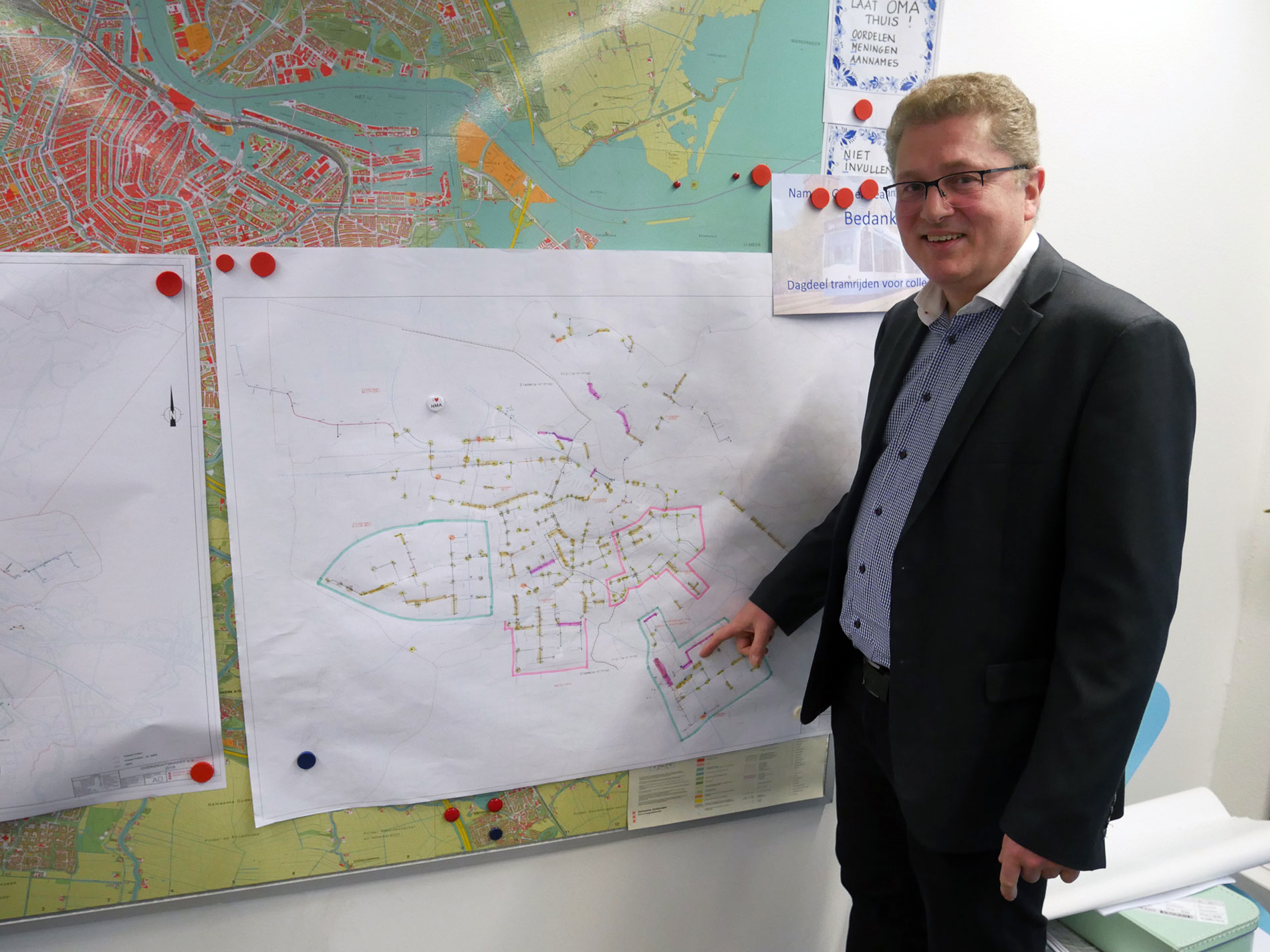 Eric Bish and his team have taken significant steps in modernising the data communications infrastructure for the traffic control and management systems. The network upgrade will continue for several years, with most systems eventually having modern IP-based data communications. Over 350 mobile routers are currently installed to connect the traffic centre with surveillance and monitoring locations across the city. Cybersecurity is critical, with the network protected by advanced firewalls and all data encrypted. 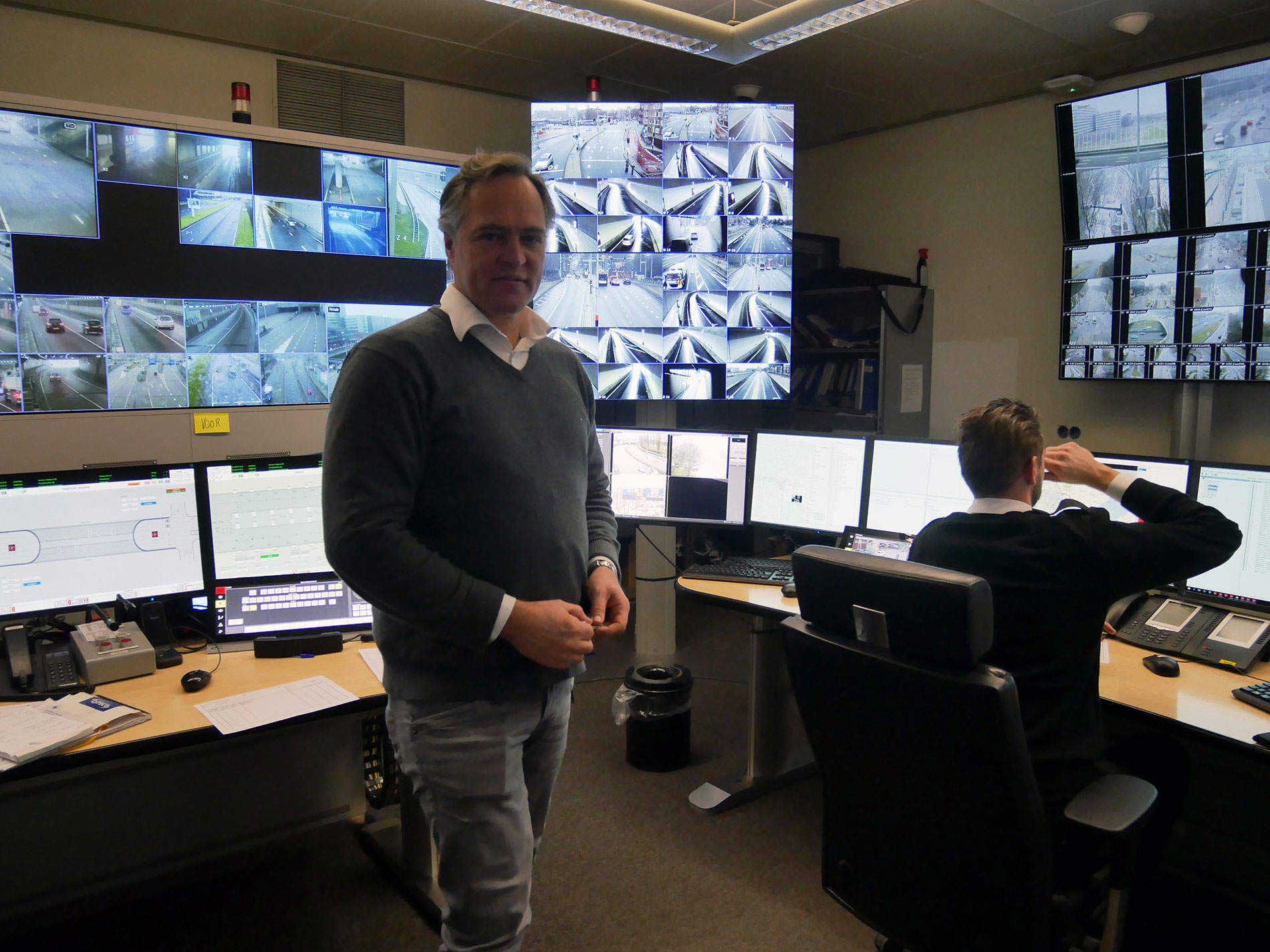 Albert Scholten in the Amsterdam traffic control room, from which the operators can redirect traffic to avoid congestion, give priority for certain traffic such as public transport and manage traffic during large events. 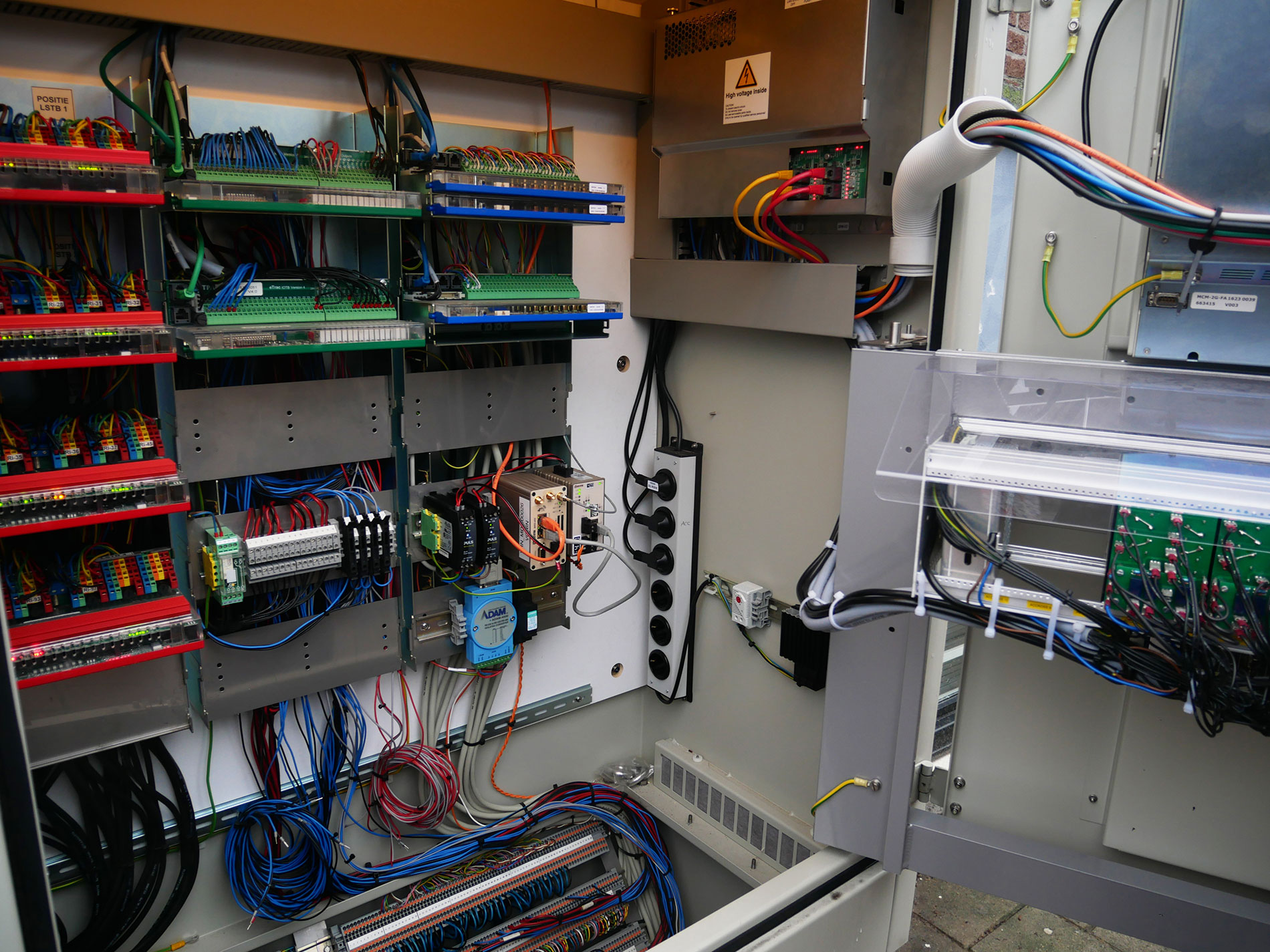 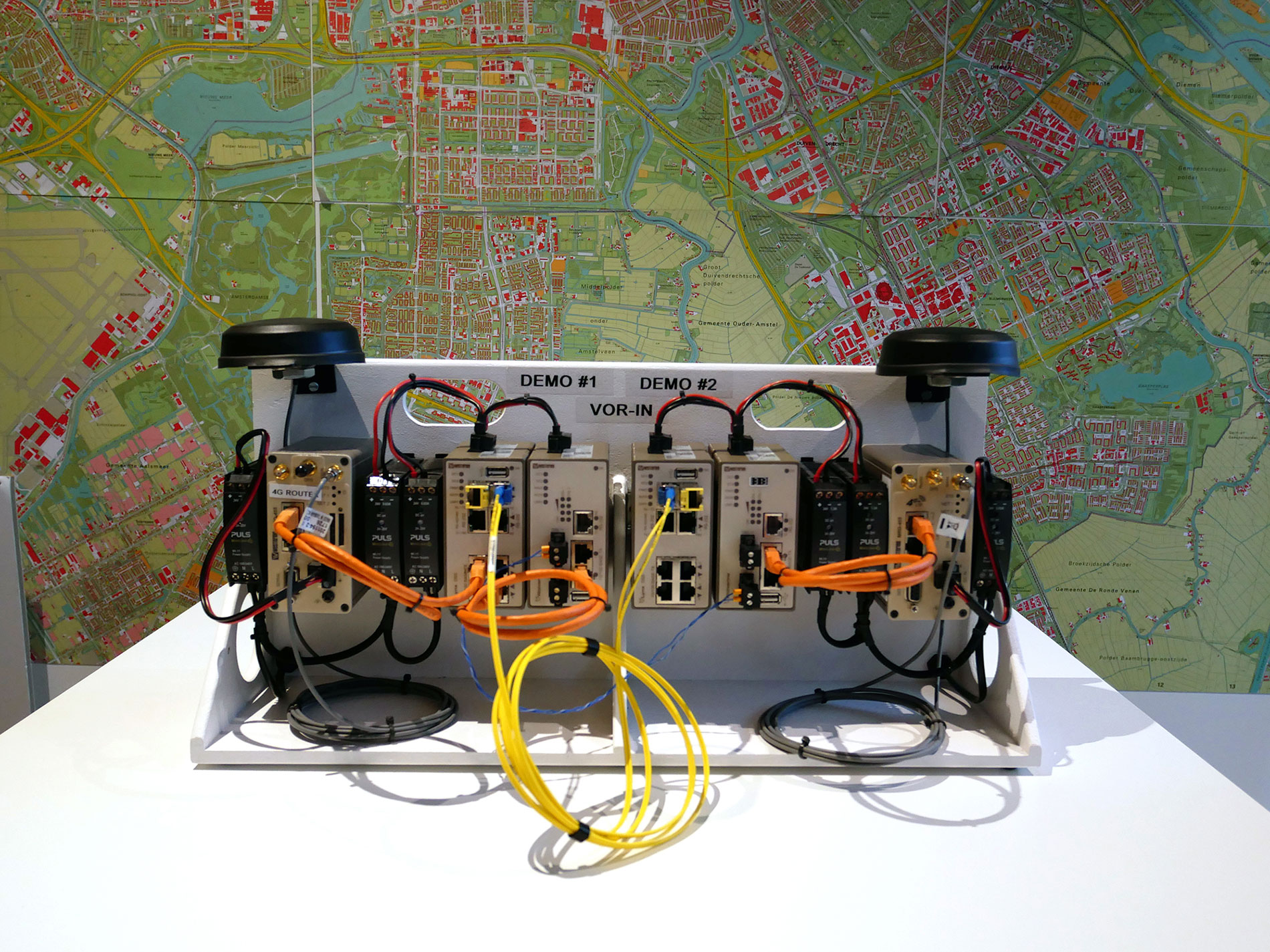 A demonstration unit developed to support system testing and provide visualisation of the data communication infrastructure required to connect the traffic signals at an intersection.