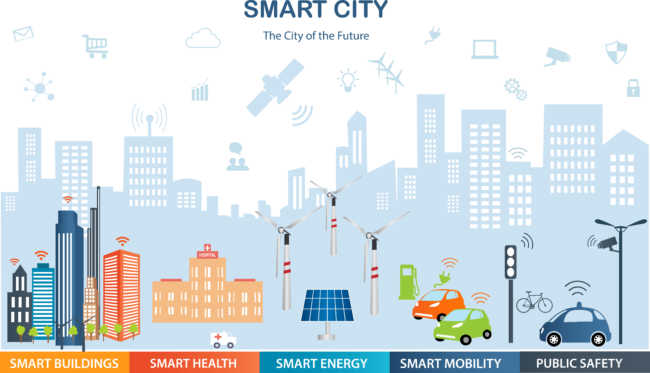 Smart cities are home to many projects with diverse scopes and sizes across various verticals, although pilot projects remain most common as the market continues to test solutions, models and results.

Fragmentation is tied to market complexity, ecosystem and other challenges.

Players in the market range from small start-ups to international giants and span a variety of backgrounds, from telecom operators and network vendors to software companies, device manufacturers and connectivity players. Each company works to advance its own market strategy, contributing to a fragmented landscape.

Fragmentation is also evident in the wide array of competing technologies used for smart city initiatives. These include the proprietary, such as Sigfox, and the standardized, such as 4G and NB-IoT. Long term, few technologies will obtain a leading market share; however, the shakeout process will be long, and multiple technologies that target different use cases and needs will continue to coexist.

Successful business models should leverage an extremely wide ecosystem of possibilities and collaborations to move the market into its next stage.

Most smart city projects remain in the pilot stage with key obstacles which must be addressed before the full development of the market can occur. Business models which promise long-term project sustainability and desired results are a key market challenge.

Given the nature of the market, opportunities can be strengthened by leveraging adjacent sectors. Whether through advertising or leveraging mobile network deployments, business models can tap into other revenue streams to monetise a smart city initiative.

The market will continue to grow as it tackles major issues affecting multiple stakeholders, from governments to cities and citizens.

Smart cities are long-term prospects and companies and cities involved are wise to focus on long-term results. The more smart-city initiatives tackle fundamental issues facing cities and countries, the more they are likely to become essential parts of government and business agendas. As a result the entire value chain will grow: IHS Markit forecasts that smart city device shipments will increase from 202 million in 2017 to 1.4 billion in 2026. Find out more about Industrial IoT platform market growth.

Vertical applications related to physical infrastructure and mobility show particular potential for growth; in 2026 these applications are expected to comprise approximately 65 percent and 22 percent of total device shipments, respectively. The largest market will be Asia Pacific with more than 700 million smart city device shipments by 2026. Other key regions will be North America and Europe, with more than 400 million and 200 million shipments, respectively. Find out about Smart cities using Internet of Things Solutions.