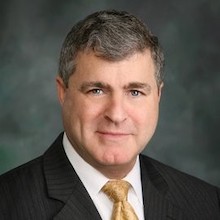 The Honorable Lucian Niemeyer was appointed on March 1, 2021 the Chief Executive Officer and Chairman of the Board of Building Cyber Security, a non-profit organization advancing physical security/safety in a smarter world.

Prior to this appointment, Lucian served in the White House as the Deputy Program Associate. Director, National Security Programs, in the Office of Management and Budget providing budgetary, policy, and management oversight for U.S. national security programs of the Department of Defense, the National Nuclear Security Agency, and National Intelligence Programs.

In August 2017, he was appointed by the President and confirmed by Congress as the Assistant Secretary of Defense for Energy, Installations, and Environment. In this role, he provided budgetary, policy and management oversight of the Department of Defense’s real property portfolio, which encompasses 28 million acres, over 500 installations with over 500,000 buildings and structures valued at a trillion dollars. Secretary Niemeyer also served the Secretary of Defense as a strategic advisor for mission assurance, energy resilience and cybersecurity programs, and as an Assistant Secretary of the Navy.

Prior to his appointment, Secretary Niemeyer worked in the private sector from 2014 to 2017 as the founder of The Niemeyer Group, LLC. From 2003 to 2014 he served on the professional staff of the United States Senate Committee on Armed Services where he was responsible for a wide portfolio of national security programs.

Lucian is an Air Force veteran, retiring in 2008 at the rank of Lieutenant Colonel with 15 years of active and five years of Virginia Air National Guard service. He holds a Bachelor of Architecture, from the University of Notre Dame, a Master of Business Administration from The George Washington University, and a Master of National Security and Strategic Studies from the Naval War College.