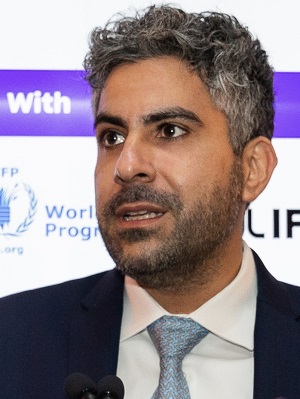 Nominated as a Young Global Leader for the Middle East and North Africa region by the World Economic Forum, Badr heads the organising committee for the world’s first Global Manufacturing and Industrialisation Summit (GMIS) – a joint initiative between the UAE Government and the United Nations Industrial Development Organization (UNIDO) that aims to transform and shape the future of manufacturing.

As the former Chief Executive of Strata, Badr was instrumental in Strata’s growth in the aerospace industry, forging new partnerships and deals with leading Original Equipment Manufacturers (OEMs), empowering UAE men and women to represent over half the workforce, and growing the company to become a global tier-one supplier to both Airbus and Boeing.

Badr also played a key role in the development of Nibras – the Al Ain Aerospace Park, a joint initiative between Mubadala and Abu Dhabi Airports Company (ADAC) which aims to establish a sustainable global aerospace ecosystem in Abu Dhabi and the United Arab Emirates.

As the previous president of the Harvard Club of the UAE and Chairman of a leading childcare company in the region – Bidayaat, Badr now serves as chairman of Strata, board member of the UAE Space Agency, and a member of the UAE Ministerial Council on the fourth industrial revolution.

Holding a bachelor’s degree in Sharia’h and Law from the UAE University (2002) and an LLM degree from Harvard Law School (2005), Badr worked as an advocate and legal consultant at Habib Al-Mulla & Company – now operating as Baker & McKenzie Habib Al-Mulla – prior to joining Mubadala.