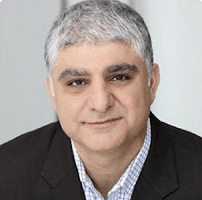 Babak Pasdar is an ethical hacker and a globally-recognized expert in Cybersecurity, the Cloud and Blockchain technologies. He has a reputation for developing innovative approaches and methodologies for the industry’s most complex security problems. Throughout his career, Pasdar has founded multiple groundbreaking Cyber-Security firms, developed large-scale infrastructures for some of the most well-known global companies, and identified critical threats to national security.

Before Acreto, Pasdar brought the first proxy-in-the-cloud platform to market, even before the word “cloud” was coined. Named one of New York’s Top Ten Startup Founders over 40, he built and exited two Cybersecurity technology companies, IgxGlobal and Bat Blue Networks.

Pasdar became a witness for multiple congressional committees when he discovered and disclosed a warrantless wiretapping mechanism in Verizon’s infrastructure — named the “Quantico Circuit” — leading to unrestricted access to private customer voice and data communications.

At Acreto, Pasdar plays the role of visionary and innovator for the company’s much-anticipated security platform. He believes that addressing the security challenges of mobile and distributed technologies, such as IoTs, will transform the way the world does business.