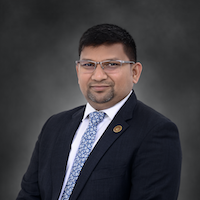 Afzal Mohammed joined Siemens LLC in October 2010 and is Head of the MindSphere and Command & Control team for Expo 2020 at Siemens, since 2018.

Until December 2017, he was Head of Business Development & Strategy of the Building Technologies Divisions for the Lower Gulf region, with a key role to drive strategy.

Mohammed has more than 20 years of critical enterprise project experience across Asia, the Middle East and Europe, and holds a Masters of Business Administration Information Systems (MBA) –SMU, India.